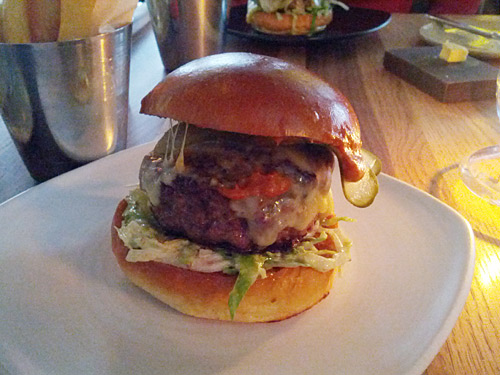 With my usual burger compadre (@cheeseburgerb0y) otherwise engaged, I decided to grab a quick dinner with a friend at Ramsay's Bread Street Kitchen. My role is usually to provide conversation and nods of approval (or not), and @cheeseburgerb0y usually figures out what's going on with the food, so I'm going to apologise in advance for the more visceral approach to this review he's asked me to write. So let's say this is less grounded in science, more grounded in beef (b-boom ting). 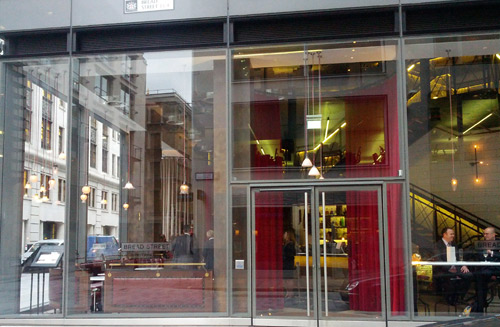 Bread Street Kitchen is a short walk (about 5 minutes) from the exit of St Paul's tube station. You can cut through the 'One New Change' shopping centre if you're brave (you don't have to be brave) and want to save 30 seconds. There's also a Byron in there if you can't get a table or want to spend half the money. 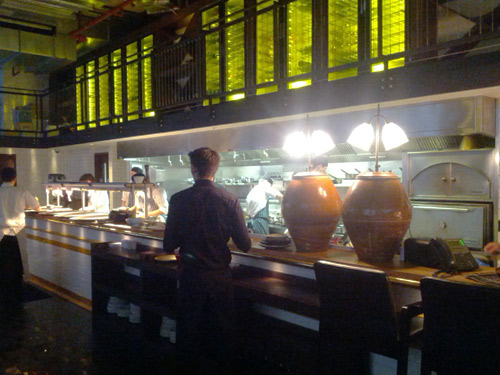 The restaurant is situated in a modern building. It's a glass fronted place with a bar downstairs. In fact there's a lot of glass everywhere. First thing you note as you go in - it's a pretty slick operation. You're directed to the restaurant upstairs where as you're greeted by the maitre d', you can see the chefs whipping up some treats in an open kitchen (which I'd assume is probably only a small part of the actual kitchen). Looking down the restaurant you realise the scale of the place. It's big. Like - really big. Huge glass windows run from checkerboard floor tile to double height ceiling the length of the restaurant. The furniture has that fashionably upcycled kind of feel and the space struck me as cross between the inside of a factory, some kind of slightly upscale 40s restaurant (or what I would imagine that to look like (thanks TV!)) and Patrick Bateman's apartment - you know, clean and expensive and a little bit 'Ramsay'. That said, the ambience was great - it actually felt very relaxed. Of course this might be because I'm used to fighting through a queue to get my food in a greasy brown paper bag (I kid). 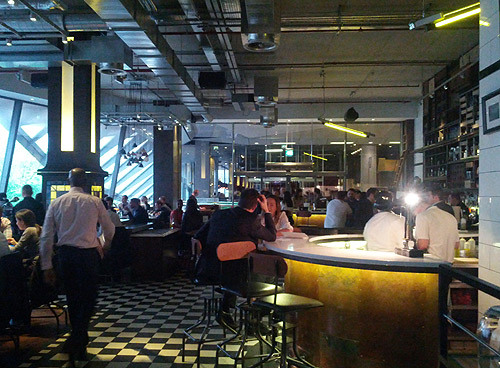 The service was impeccable. Everyone was warm, friendly and helpful. Waiting times were almost non existent both for food, and um, waiting. I will say though, we ate about 6.15. The restaurant wasn't too busy when we came in, when we left an hour or so later, it was pretty full. But looking at the general attentiveness and the number of staff, my guess is the service is going to be pretty good even at the busier times. 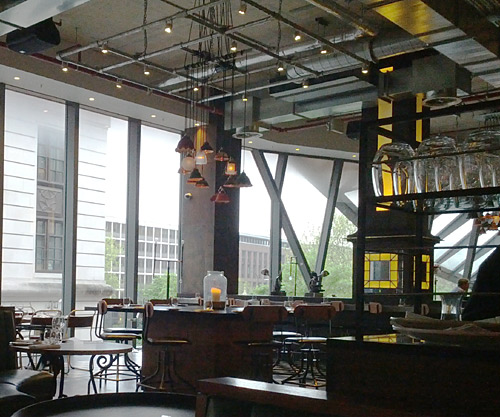 Initially I asked for a beer (I couldn't find a list on the menu - I'm sure there is one, and it's probably pretty good - I wasn't looking very hard) and was offered a Peroni. However, feeling the pain of what seems like a rapidly approaching alcohol problem, and deciding to take a night off, I nixed it and went with some sparkling water (also, Peroni is kinda boring, don't you think?). Water was quickly delivered, along with some butter on a rectangular block of dark, polished wood, with a couple of crusty bread rolls that looked a bit like weapons (sort of like throwing stars, but more 'stabby'). The waiter came for the food order shortly after, and I went with the 'Bread Street short rib burger, Monterey Jack, tomato ketchup' and 'Hand-cut chips' (obviously). As a side note, if you decide to take a significant other who doesn't share your passion for beef between bread (they exist), the menu seems pretty good. When the food arrived, I've gotta say I was pretty impressed. It looked good and smelled great. Delaying the main point of this 'review' further, the chips (£3.50) were fantastic. I'm more of a fries man normally (nailed at MeatLiquor, IMO), but these super crispy bits of golden potato had a soft and fluffy inside and were worth every penny (they definitely class as 'chunky chips'). The salting was perfect and my dining companion even remarked "these are the best chips I've ever eaten". In other words - they were good.

The burger was tall but looked wonderful. The brioche bun had that super sheen to it that just staring at makes your heart hurt (buttered, I assume?!). The height comes almost entirely from the perfectly cooked patty - at £12.50 it's in the more 'expensive' category (Hawksmoor et al) - but you're getting a lot of meat for your money. And good meat at that. The menu says short rib, the waiter said there was also shoulder chuck - I can't tell you anymore than that. I can tell you it was lovely. 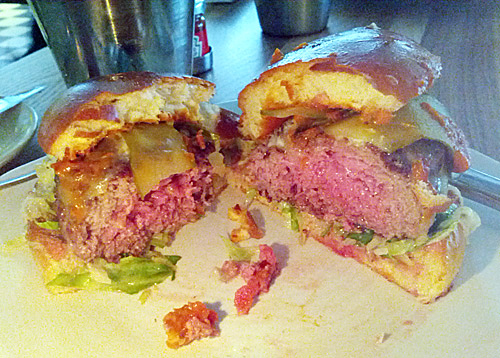 Meat aside and being a little catty (sorry Gordon - and I'm aware there's a finite number of ways to make a burger), it feels (and to an extent tastes) very much like @fredsmith_'s awesome burger at The Admiral Codrington. The base consists of a mustard-mayo-lettuce-slaw, the patty is topped with cheese (the Internets say Bermondsey Frier, the menu Monterey Jack - I couldn't tell you the difference) and a couple of super thin gherkin slices. The underside of the top of the bun is dressed with a homemade ketchup. If you can get everything into your mouth in one go (as in a bit of all the parts, not the entire burger), the blend is wonderful. The homemade ketchup has a very peppery (as in capsicum) taste (I could be wrong) - it's also very sweet. I could see it overpowering everything if it was applied liberally, but as it was supplied, it worked a treat. 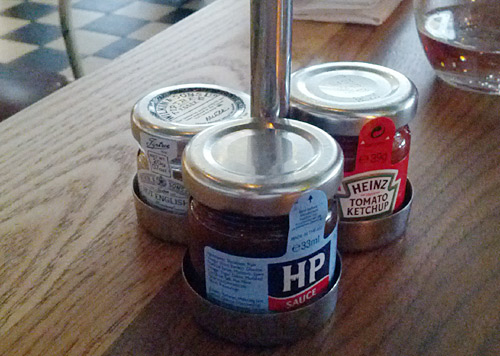 I'd happily recommend this as one of my top burgers in London. To put it into context - @cheeseburgerb0y and I ate at Davy's in Holborn the night before. The Davy's burger wasn't at all bad, and I'd happily recommend it, but side by side, the Bread Steet Kitchen burger is leagues above it. A job well done.