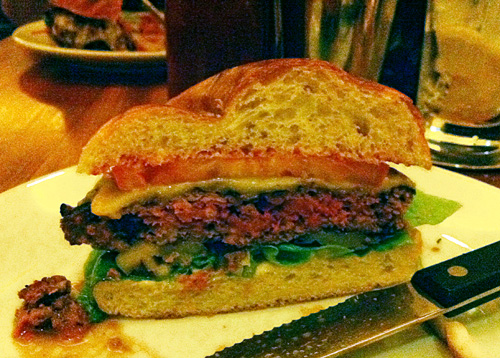 29th of March 2011. I had a rare meeting in central London to goto, and opted out of a free lunch to meet my cousin and pay top dollar for a Hawksmoor cheeseburger instead - dedication huh! 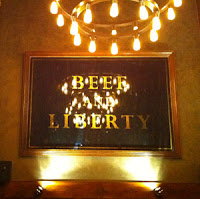 The Soho venue is something of a tricky place to find, a large dark door on Langley street opens into a dark wooded reception and cloakroom area. You then head down a flight of stairs, going under the Beef and Liberty sign, descending into this basement restaurant. After reading the achingly cool steak club history dating back to 1735, i felt something of a philistine when ordering a burger, but i'll be back for a steak at some point i'm sure. 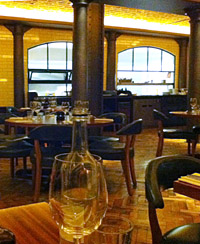 We went for a Hawksmoor and a Kimchi burger, the former coming with Ogleshield cheese, the latter with fermented Korean vegetables which have a cheeky spicy pickled taste. An unusual and perhaps gimmicky addition to a burger, but an original one which works surprisingly well. That said, i doubt i'd choose anything other than the Hawksmoor burger here again as it was simply perfect. The meat comes form British Longhorn cattle and is prepared with the addition of small nuggets of bone marrow. The result is fantastic, a super flavoursome meaty treat. They serve a large patty cooked perfectly medium rare, served on a soft brioche bun with lettuce, red onion, tomato and my choice of cheese was Ogleshield. Its probably the best burger i've eaten in London. I'm not a huge fan of tomato in a burger, but the balance of ingredients was absolutely spot on. The triple cooked & beef dipping chips were great too, crunchy on the outside and soft and fluffy on the inside. They were served with little old fashioned bottles of homemade ketchup, which was a nice touch and great tasting it was too. I'd have bought a bottle if it was available. 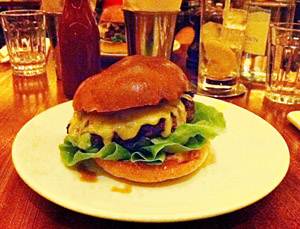