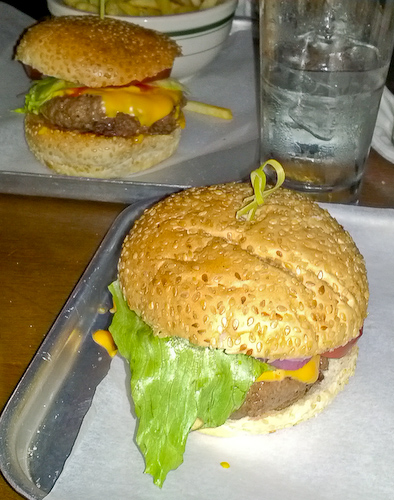 Lookout! its @yesiamben again!
The attention to detail and actual science that's going into this review is, ahem, fairly awful I'm afraid. You see eating here was a total unexpected surprise, and I was somewhat, well, for lack of a better word - drunk. I'd been drinking in Clerkenwell at Craft Beer. If you're in the area (or planning a burger), I definitely recommend that bar. There is a *lot* of good beer on tap. 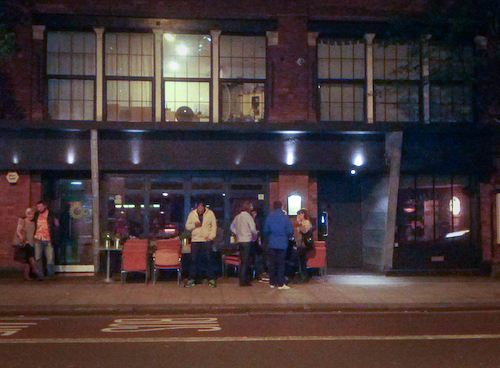 Anyway, at some point in the evening, food was suggested. I proffered up Dollar Grills and Martini's. It's a great burger. But instead we headed to Giant Robot. And I'm very glad we did (although I must work on my powers of persuasion). Firstly, how freaking cool a name is 'Giant Robot'? I can only begin to imagine how they came up with it -
"Let's call our restaurant 'Super Awesome'".
"Bit obviously isn't it?"
"Giant Robot then?"
"Oh hell yeah."


It probably went like that. Because let's face it, giant robots are insanely cool. Unless you live in Tokyo and it's trampling over the city (probably forgivable if it's fighting Godzilla or Mothra or something). Or you're Megan Fox and Michael Bay has decided not to cast you in Transformers 3. Or... you get the point. 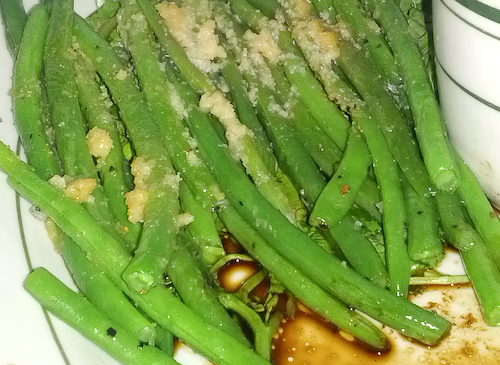 We went in late, 10pm maybe? It was *busy*. Very busy, busy. A super polite and smiley guy said it'd probably be half an hour before he could seat us, but we could get a drink. Approximately 60 seconds later he found us a table, and approximately 60 seconds after that he asked if he could move us to a smaller table to seat some more people. Of course we obliged and he returned with some complimentary 'cocktail shooters'. Um, thanks?!


Giant Robot is apparently known for it's meatballs - there's a load of them on the menu. But there's also a burger - all so unexpected, see? We ordered a couple of burgers, a steak and some garlic beans. 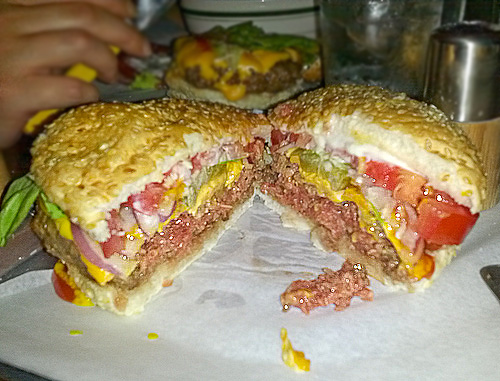 A short (probably?) wait later and our food arrived. The burger was served closed, on a piece of paper on a silver tray, with some fries in a bowl. Quite wonderfully, it came in a traditional sesame seed bun. I'm seeing so many glazed buns at the minute, the change was lovely. Ok, the burger was sloppy. Not Meatmarket/liquor sloppy, but lovely so. The patty was topped with American cheese, there was some lettuce, red onion, gherkins, tomatoes and mayonnaise. It squished down perfectly. And boy was it good. If anything, the patty was on the rarer side of 'rare' - I hadn't asked for it cooked a particular way - but really, really good. And that's pretty much all I can say. I will add, however, that the garlic beans were absolutely something else, truly excellent. For some reason we also got some free shots after the meal. Again, thanks?!


Nick, over at the wonderful Burger-Me came here last year and had the sliders. Therefore I can only assume the burger is new - and what a great addition. Definitely recommended. And I promise we'll give it another go (and update if necessary). When sober.