Highly regarded by some yet has left others underwhelmed, is the Wenlock & Essex burger is a goodun or not? Read on burger fan, read on...
Directly opposite the Islington branch of The Diner sits this grand old pub. Nicely decorated, well lit and with a huge bar, its a decent spot, and definitely a place i'd happily while away an evening with pals and beers. 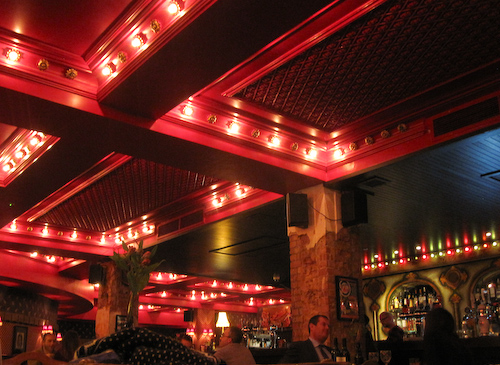 
The burger options on the menu are simple enough, and by that i mean that there's only one, although you can add Cheddar, Bacon, Jalapenos, Blue cheese or a Fried egg to it for 50p per extra. Always something of an early concern, as optional extra's generally rule out the main burger being a culinary masterpiece.
@yesiamben ordered the standard W&E burger and fries for £10, and i added Blue Cheese to mine for an extra 50p. We then cut 'em in half and tried both.
The Bun is ok, standard soft brioche fair, lightly toasted on the inside but slightly too big for the rest of the ingredients. On top of the lower bun half is shredded iceberg lettuce, then the good looking patty, the pulled pork, the slow roast tomato, gherkin, and finally the top bun. 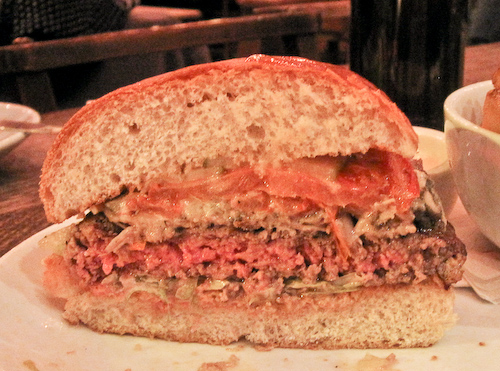 The patty is nicely cooked medium rare with nicely crisped edges, but it was pitifully under seasoned, slightly overly mixed/ground and rather dry. BIG shame, because well, its the heart of the damn thing isn't it. The pulled pork was also lacking in flavour, it seemingly had neither been seasoned or 'sauced'. I would have loved some smoky or sweet BBQ flavour in it which would have added taste and wetness - just look at the photos to see the lack of burger juices on the plate. There was a lot of pork too, i expected a little taste of it to complement the burger, rather than enough to compete with it. The tomato added little flavour, but the gherkin added its usual salty crunch at the top.
The standard burger was really quite disappointing, it was only our choice of the additional blue cheese which added that needed pang of flavour. 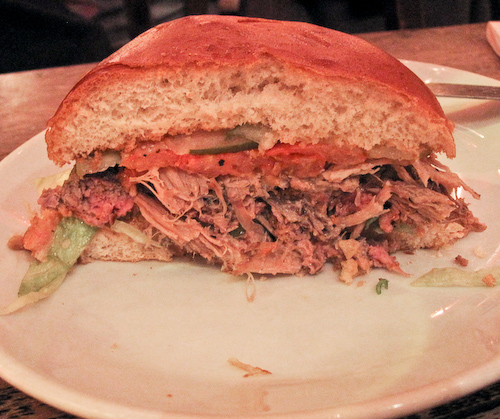 The standard W&E Hand made Angus Burger - a serious lack of burger juice.

I think these guys could massively improve their burger very simply. Here's my 3 step guide to success:
1. Add more salt to the patty cooking process.
2. Add BBQ sauce to the pork and add less of it to the burger.
3. Use a fattier cut of beef for extra flavour and juice.
4. Use a bun that's 10-15% smaller.
I imagine that would add up to a way more satisfying burger, but hell, what would i know.