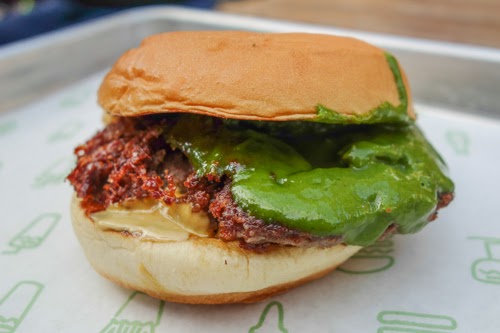 [@yesiamben] At lunchtime on Sunday I popped along to Shake Shack in Covent Garden to try a very special, limited run of 500, first come first served burger. The 'Emilia Burger' (named after the Emilia-Romagna area in Italy) was a collaboration between Shake Shack and Massimo Bottura, the owner and chef patron of Osteria Francescana. For those hearing the name for the first time, Osteria Francescana has 3 Michelin stars and was ranked the world's 3rd best restaurant in 2013. He'd made this burger as a limited special in New York for Columbus Day (and apparently it had gone down pretty well), so I was kind of excited to give it a go. 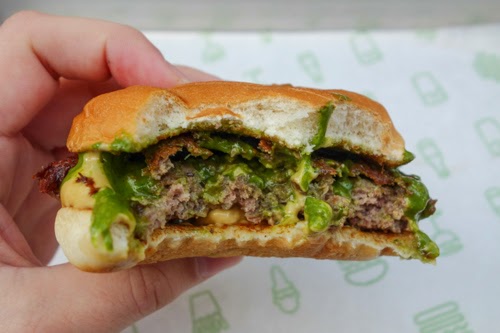 While Massimo sat signing copies of his new book 'Never Trust A Skinny Italian Chef', I grabbed a burger and tucked in. First things first - this is a classic case of the burger not looking like the press shot. I mean - the green stuff (salsa verde) doesn't look terribly appealing in my photo (and as CBB's wife said "especially when you have children")… But never judge a book by the cover, right?! 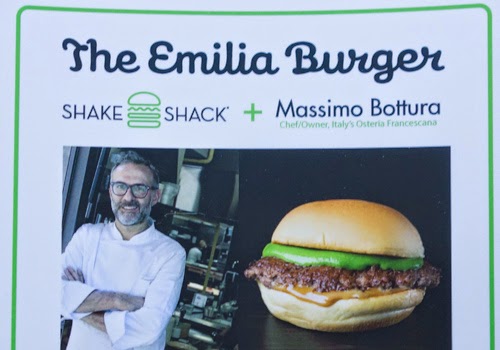 The burger itself was your pretty standard Shake Shack affair - the soft (potato?) bun, the skinny patty. We've said before - as far as this sort of burger goes Shake Shack have it nailed. The press leaflet said the burger was ground with cotechino sausage and parmigiano reggiano, but I'm fairly sure it was a ground layer on top of the patty, cooked to crispy (different I think, to the NY version, where the sausage was in slices on top of the patty). Salsa verde sat underneath the top half of the bun, and Villa Manodori balsamic mayo below the patty on the bottom half of the bun. I started with a dip of my finger in the salsa verde. It had a punchy, lingering flavour, with the anchovy (?) coming through strong. The mayo had a beautiful tang. Taking a bite of the burger was rather lovely experience. The flavours sat perfectly together, balancing each other in a way that made each mouthful a delight. Nothing was too strong - just a wonderful, different and exciting blend - especially when you're used to the usual cheese and bacon affair. In fact, the only real problem with this was it was over so soon.

I'd love to try the setup of this burger with a different patty. Maybe something slightly bigger. But I wonder if half the genius comes from the fact it was a Shake Shack burger. I could have eaten two - but did I need to? Probably not. Would I like to try it again? Absolutely. You have to be pretty bold to try something 'very' different (salsa verde?!) in a burger. And most often than not it just doesn't work. But if anyone is going to make it work, it's going to be a guy with 3 Michelin stars. And make it work he did. Two thumbs up Shake Shack and Massimo.