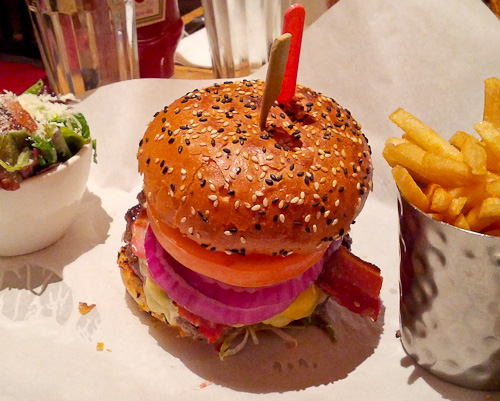 Last week I headed down to Soho to finally try Burger & Lobster. I say finally because every time I talk to someone about burgers (who isn't a burger glutton) they say "so have you tried Burger & Lobster." Irritatingly I have to say 'no' every time, at which point the conversation ends. To be clear, I don't think it's because they've actually been to Burger & Lobster, but more that they've read something about it, heard something about it from a friend, or seen some celebrity Instagramming pictures from inside.

Anyway, I was with my friend Ben (two Ben's, yeah) and we went for a late lunch. Around 2ish on a Wednesday, the place was pretty quiet and we were seated without any drama. Having been past later in the day (and inquired about tables), I can confirm lunch time was a lot more sensible - they don't take bookings (for less than 6) and the evenings are *busy*. 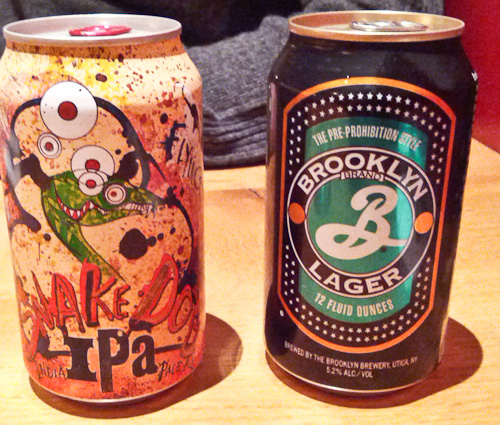 The Soho restaurant is pretty big, lots of light wood, pictures of lobsters and fairly tastefully decorated. It's very much 'date-night' friendly.

For those that don't know, Burger & Lobster has 3 things on the menu - burger, lobster and lobster roll. Except they don't have a menu, so really they only serve 3 things. Well they do have a menu, but it only has drinks - which kinda of irritated my colleague - sure it's only three things, but I think he wanted to see them written down, with a price. Talking of prices, every dish is £20, which makes it pretty simple - I like a place with a small menu. They also gave us the option to have half each - but seeing as I think I'm allergic to shellfish I stuck to the burger. Other Ben went for the lobster roll. We ordered them with a couple of beers - a Brooklyn lager and a Snake Dog IPA (which came in at a punchy 7.1%). The beers arrived a couple of minutes later, in 330ml cans, the food arrived a short while after. 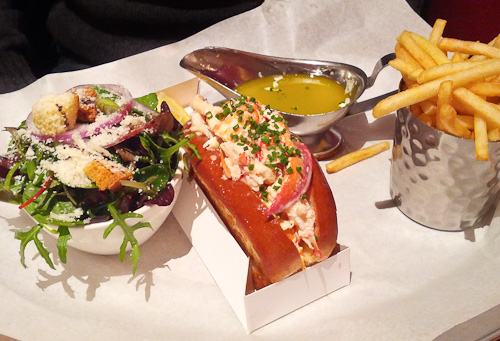 First thing I noted, the presentation was great. The food sits on a big silver platter, topped with grease-proof paper. The chips sat in a silver cup, and a beautifully dressed salad sat in a bowl to the side. Ben's lobster roll came in a piece of toasted Brioche (it looked lightly fried, actually) with a buttery topping in a silver jug. I think he found the roll a little sweet but said the lobster was fantastic. I was impressed with the salad - croutons, onion, rocket leaves (I think?!) and grated parmesan with some dressing. It's a little thing, but was done very well. The chips were fantastic - I'm a big fan of fries, and these were done very, very well. 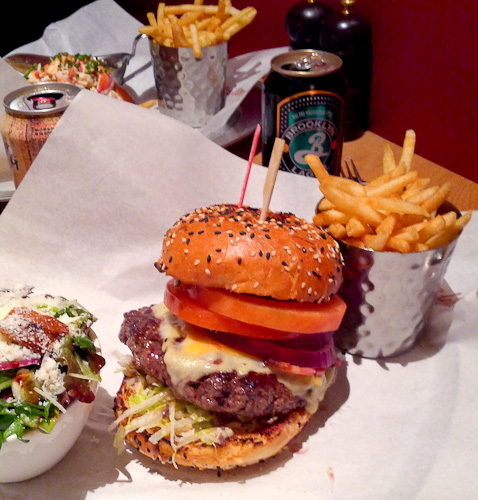 So how was the burger? In a word - good. I'm not sure I'm going to make any friends with this, but I don't think I want to go as far as 'great'. Firstly, it's definitely at the other end of the (decent) burger spectrum from something like MEATLiquor - probably more comparable to the kind of thing you used to get from the Ad Cod - it's a long way from 'sloppy', definitely what you'd expect in the top-end price bracket. I think you could confidently assume you're going to get a good burger here - I just don't think I was surprised, and I don't think it was *amazing*.


Firstly, the multi-seed bun was a treat, fresh, toasted - and nice to see. Working upwards, on the base was a lovely lettuce slaw, of which I'm a huge fan. A cheese topped patty followed. I asked for medium rare - which I'd say they delivered on, pink in the middle, but by no means rare and brown around the edge. The meat was good, certainly what I'd expect for the money, and the cheese complimented it well. Atop the patty was a couple of slices of good bacon, a couple of rings of raw red onion, a couple of large slices of tomato, and a few slices of very sweet, and very tasty pickle. I can't say I've ever been a fan of large slices of tomato in a burger - so much so that I was tempted to ditch them - but I left them in and went for it. And it was good. The flavours were very complimentary. Nothing over-powered, and the sweet pickles were a lovely addition to each bite. 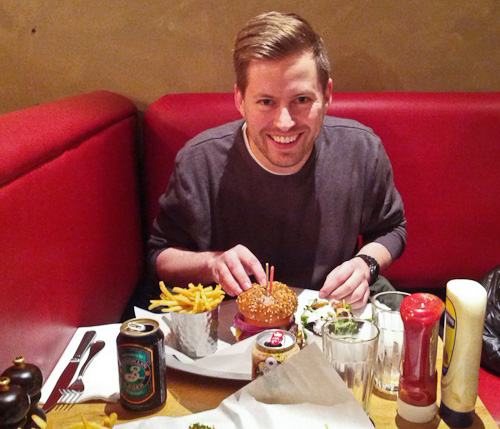 @yesiamben doing what he does best - eating.

Burger & Lobster is definitely worth a go. The service was very friendly and definitely a thumbs up. It'd be a lovely place to take someone, especially if you both like lobster and want to split something. I'd imagine if I liked lobster, the lobster roll would be a win for me. The brioche looked fantastic. The burger was very good, beautifully presented and the salad was a nice touch. But again, for £20 you expect that. Give it a go - and if you can't get in, Honest is just around the corner.

No surprises, but ultimately pretty good. A very solid 8.5.