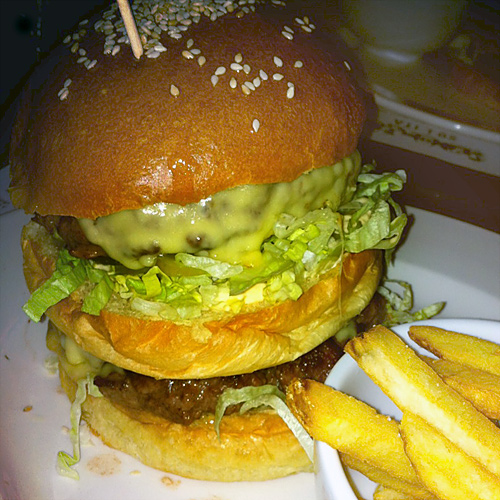 Dave BigMac reveals the burger secrets of the north


Solita, or South of Little Italy as I'm sure no one will ever call it, can be found in Manchester, England's Northern Quarter, on Turner St. The following is a recounting of the authors first and only visit so far, written from memory as the review while welcome, was also unplanned.

Born in the summer of 2012, Solita is part diner, part after-hours juke joint. As a Londoner visiting the land of rain and eyebrows, I fancied something greasy and meat based, and after being turned off by the sheer ah-meh-zingness of Almost Famous, the Manchester United of Manchester's burger establishments if you will, I was drawn to Solita purely on looks along. I am a shallow man, I judge books by covers.

Sitting down, to be greeted by a menu that literally made my mouth water at the thought of even seeing food this good, I was immediately drawn to The Big Manc (see what they did there?) Yeah I thought about others, but in reality, there was only one option for me. My dining companions had.....I want to say The Inka Grilled Catalan which looked nice, chorizo, peppers... all that lark, and I can't remember what Mrs. Dave had. Sorry, if I'd known there was going to be a test I would have cheated and taken notes.

Anyway, yeah The Big Manc. I should at this point mention that The Big Manc is merely the younger brother to the Mega Manc, which is about another 33% more on top, basically a small cow more. The head chef told us that one guy had been in and went for the MM option, but had also had a 15" Pizza beforehand, y'know just to warm himself up. Basically the MM is for fucking mentalists and the Big Manc is for cool dudes. It's 2 x 6 ounce minced chuck steak patties, served in a trifecta brioche with about 7% more iceberg lettuce than is necessary, pickles, Monterey Jack and Big Manc Sauce. As burgers go it's up there with any that I've tasted in London. It matches Meat Liquour for flavour, Byron for quality and is nearly there with Honest Burger for invention. It's a little bit on the messy side, and the bottom bun could do with a bit more depth as by about half way through I was sizing up a knife and fork and 2/3rds of the way through a spoon, but this shouldn't take anything away from the party that was happening right in my sinkhole.

Served with fries that well....passed the test but could have been better and washed down with a more than adequate Mojito  (part of a very fine cocktail list) and a couple of Sam Adams Lagers, they stock some excellent beers too by the way, I left a very satisfied customer. 8/10.