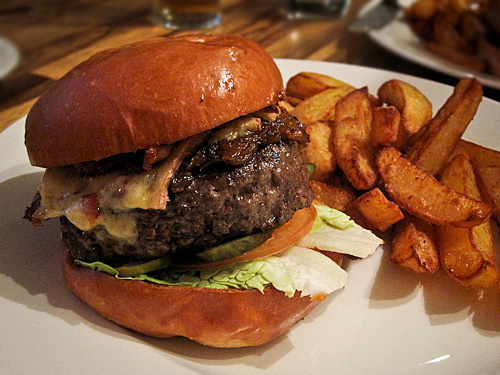 The Admiral Codrington has for some time been known for serving one of, if not the best burger in London, thanks mainly to the passionate ex-head chef, Fred.
Since Fred has left and joined the Byron burger boys there's been much web rumour about the AdCod burger quality going downhill. After some twitter debate about this with @JamesBreakage we were both invited to see what we thought of the new AdCod burger, so in the fine name of burger research i ran straight there went along first, and James checked it out shortly after.


The ever delightful staff gave @yesiamben and i a warm welcome and explained that new head chef Dave Johnson has gone for more of a classic English rather than American style for the new burger. They didn't want to change the formula too much, and hence the patty is pretty similar. They no longer source their beef from the Ginger Pig which was something of a surprise, opting instead for 'Select' but they still stick to a 70/30 ratio of Chuck/Rib cuts.
The new design sees the construction of the AdCod's big seller as follows: Brioche bun, tomato relish, cos lettuce, slice of tomato, slices of gherkin, patty, caramelised onions, melted Ogleshield cheese, bacon, topped with another tomato relish daubed tasty brioche bun half. 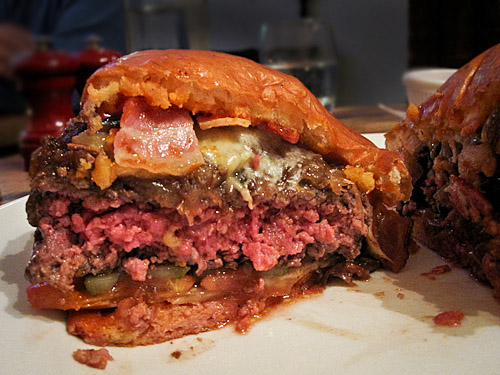 Now you'd think with all those veggies at the bottom that moisture would be an issue, and well, you'd be right. The bottom bun disintegrated way too quickly which was a disappointment, although cutting the thing in half for a photo probably increased the juice absorption a fair amount. The burger was still manageable without resorting to eating spanners, but it did get pretty messy. James, Ben and I all agreed that the tomato slice is totally unnecessary and spoils the balance of ingredients somewhat.

The bacon wasn't nearly crispy enough for my liking, and because of that i'd have prefered it without. It was sliced up which i appreciate, but even so, it wasn't a patch on the super crispy bacon Fred used to incorporate.
The patty was damn good, light in texture, nicely medium rare, well seared around the edges, well seasoned and very tasty. The caremalised onions and Ogleshield cheese were spot on too.
I think this burger could well evolve into something pretty special if they can iron out these little niggles. 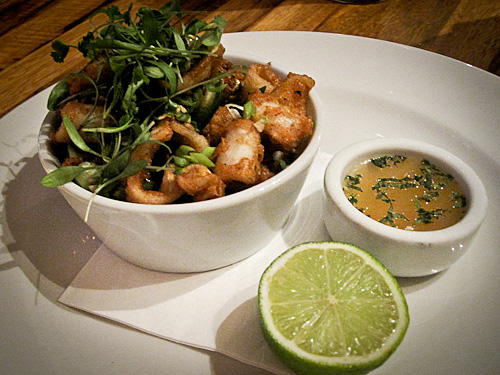 The AdCod's excellent chilli squid starter is always worth ordering. 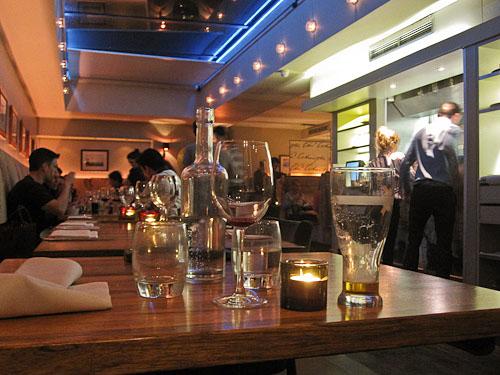 The AdCod is one of my favourite West London pubs, there's always a good atmosphere and the staff are great which makes it a fun place to hang out. The new burger hasn't reached the heady heights the old one managed, but its early days, and i think there's the potential that it could get very close with some small adjustments. Who knows, if Dave really puts his mind to it, it may even eclipse the last one. The AdCod is hallowed land in the London burger world, it would be great to see it on top again one day soon.