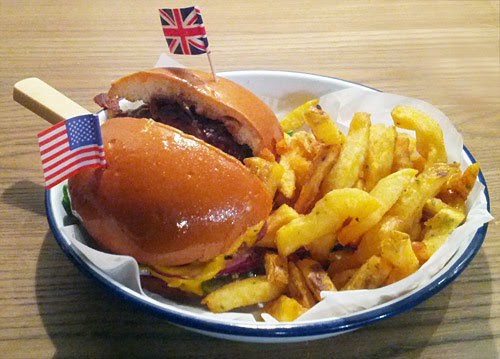 [@yesiamben] Earlier this week the new Honest in Camden invited us over to share our thoughts on their 'American' burger. This was a rather exciting invite for 3 reasons - firstly, we love Honest. Secondly, we love 'American' style burgers. Thirdly, it'd be our first visit to Honest in Camden. Triple cooked win.


You can find the latest restaurant in the Honest family just across the river (if you're coming from Camden Town), near the lock. It's not exactly tucked away, but I did manage to walk past it first time - possibly because it's less of a restaurant and more of an 'area' but more possibly because I'd already had a beer... It's good though - you can sit right in front of the kitchen and watch them make the burgers, or you can sit the other side in the pseudo open. Despite the lack of glass, it feels very much like the other Honest restaurants (the Brixton village one in particular).

The American
Since Honest opened in Soho, it's very much been a goto place for me when I've been drinking or had meetings (neither of which are mutually exclusive). I love the fact they'll take a phone number, send you away to the pub and call you when you're good to eat. Beats queuing *every time*. Better yet, the Honest burger remains one of my London favourites. Is still as good as the day we first reviewed their Brixton Village place. With the regular Honest burger being so good, could an American burger compete? Did it deserve a place on the menu? 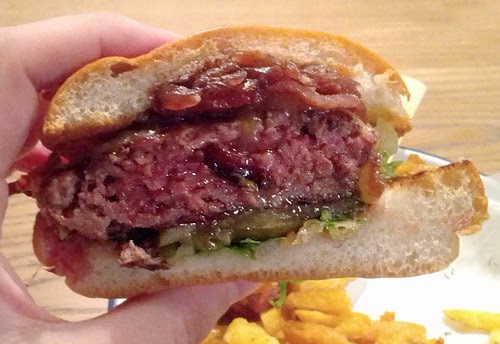 The Honest
The idea was to have half an American and half an Honest burger - then say which was the better. I suppose a bit like a Ryder Cup of burger eating. But without the golf. Or the rest of Europe. The Honest burger was as good as ever. I won't bore you with something we've already covered, but needless to say it's great. The American burger was, well, also great. 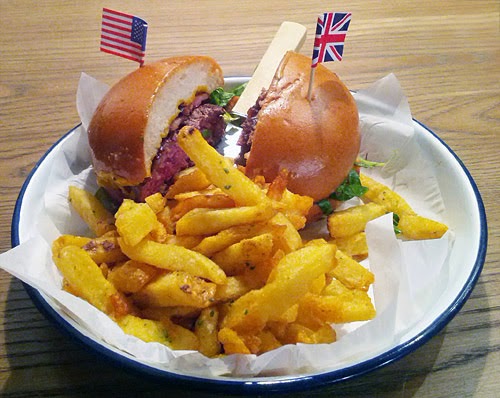 Along with the fantastic patty that Honest does so well, the American came with lettuce, red onion, pickled cucumbers (gherkins!) and a burger sauce / capers mayo mix. On top of the meat was an American slice, French's mustard, and, like it's British cousin, two slices of bacon. Prior to serving, the top with the bun was cooked under a cloche, making it soft and moist. And needless to say, the Honest take on the Yankee classic was rather good. 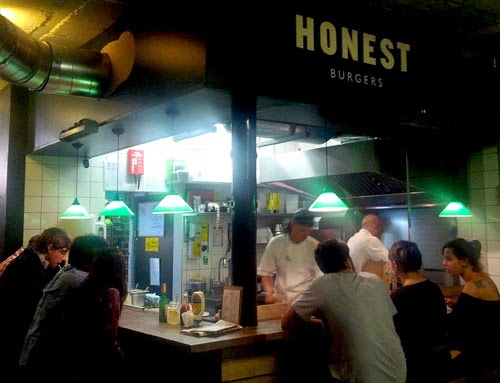 How good, I hear you ask?! Well definitely good enough for the menu. I think if it was a special, I'd order it every time, safe in the knowledge that the Honest burger will always be there for me when it's over. But if it was a regular menu item, it's a little harder. There's something very special about the Honest burger - and whilst the American is great, there's a few places you can get a great American style burger. But there's only one place (well, three) you can get an Honest. If it makes it to the menu - definitely give it a go. But I don't think you'll have it every time.