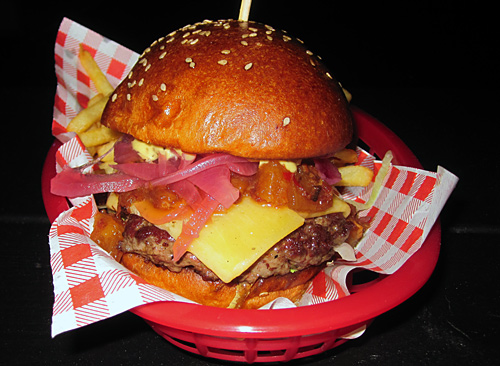 [@yesiamben] The previous Disco Bistro popup at Rising Sun in EC4 served a wonderful burger (not pictured). It really was. The £10 'Disco Burger' was a Devon Ruby burger with bacon and cheese, served with fries, in a basket. The fries are much the same as they are at Disco Bistro N1C - thin, crispy and wonderful. The burger was, well - amazing. The patty was 30% fat and (from looking at my dreadfully scrawled notes) a mixture of rib, sirloin and bone marrow, cooked over charcoal. And boy was it good. Just pink enough, juicy and ever so beefy. On the bottom of the bun was some lettuce and ketchup, on the top of the patty some pickled red onions similar to those at N1C. But then there was bacon (which was pretty good), and for me, the icing on the cake - a gloopy rarebit style cheese mix consisting of beef fat, dark ale, Worcester sauce and some different cheeses. 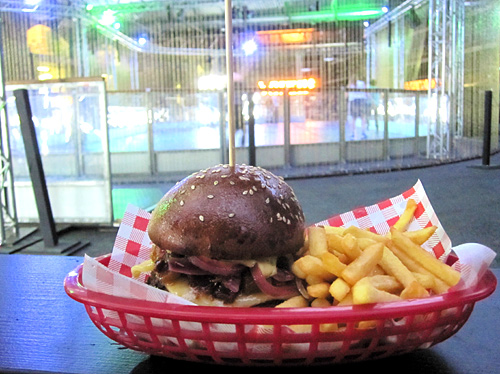 And so I was pretty excited to meet CBB at Skate Kings Cross and try Carl's new £10 Roller Disco Burger - a rare breed beef patty, cheese, bun sauce, pineapple & bacon jam with chips. Now don't get me wrong - this was good, it just wasn't as good. I'm not a huge fan of pineapple, but it worked well - it wasn't over powering and complimented the bacon jam nicely. The patty was just as good, but I've got to say, I was a little let down by the cheese - it looked like a plain old slice of cheddar. It's not that there's anything wrong with that, just after the last rarebit style sauce, I was expecting greatness.
All that said, the popup was good. And watching the skaters was fun - it'd make a pretty good first date - skating and a burger. I'll let CBB take over: 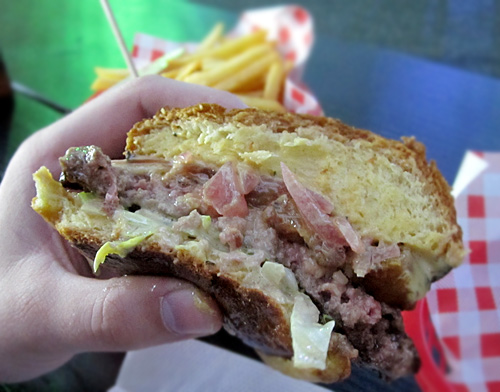 [@cheeseburgerb0y] It would be a good date location, apart from the constantly falling over and looking like a dick part.
Disco Bistro N1C is a popuppey part of the cool new Kings Cross development area that is KERB, Granary Square, art and so on.
The Disco Bistro setup next to SkateKingsCross looks like something out of A Clockwork Orange, its very cool. And staring at the hot roller girls evoked memories of that Heather Graham film watching the rollerskating while we ate was fun. 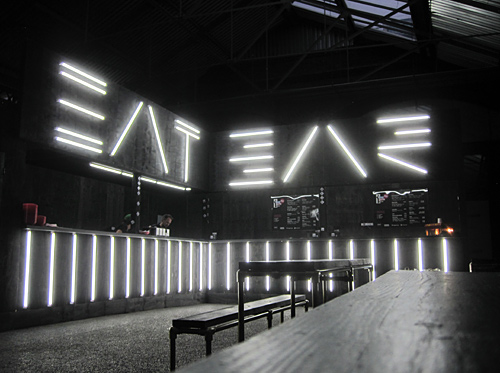 The burger was pretty decent, but let down by three factors: 1. The un-melted cheddar was claggy and disappointing. 2. There was way too much sugary bacon and pineapple jam. 3. It was overloaded with sliced pickled onions (i pulled some out). Unfortunately this resulted in overpowering the flavour of the all important bit - the delicious beef. I like pineapple, but that flavour overwhelmed this potentially great burger. The patty itself was lovely; medium rare, nice texture, coarse ground and ridiculously juicy, but by my book, the ratio's of the ingredients were way off. And also, the amount of burger sauce, jam and patty juice made the burger a bit too wet for my liking. 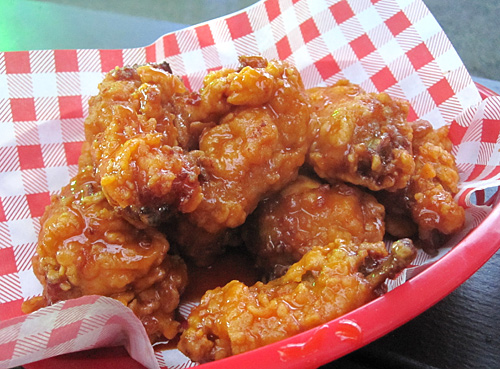 The spicy chicken wings were very tasty, although over battered, distancing the chicken flavour somewhat. The chips were excellent - crunchy and well seasoned.
Disco Bistro has received many excellent reviews, so my expectations were high. It was pretty good for £10, but to be honest i wouldn't buy another one of these pineappley incarnations, i'll wait for the next Disco Bistro creation. 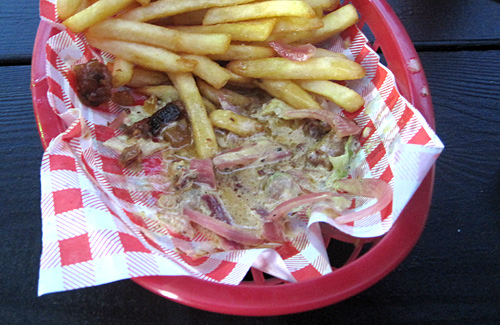